Fly into the clouds with “If You Leave”, a highlight single from WhoMadeWho’s collaboration album “Synchronicity” out on Kompakt Written across the miles during lockdown, Robag Wruhme re-worked the band remotely. The result is a soothing dance floor lullaby soundtracking a message of hope through these difficult times.

“Dynasty” is the second single taken from WhoMadeWho’s forthcoming sixth studio album “Through The Walls” which will be released on 19th January 2018. Co-produced with fellow Copenhageners and dance music luminaries, Kenton Slash Demon, the new album sees the trio, tapping into the same musical restlessness that formed them, making the band incorporate new modes creativity, songwriting, and production. This is probably WhoMadeWho’s most cohesive and daring album to date; a testament to three maverick musicians working at the apex of their game.

The track “Dynasty” will be released at the same time as the pre-order start for the album on 3rd November.2017. The associated remix-bundle featuring high-profile mixes from Roosevelt, Denis Horvat & Jimi Jules will follow on 17th November 2017. 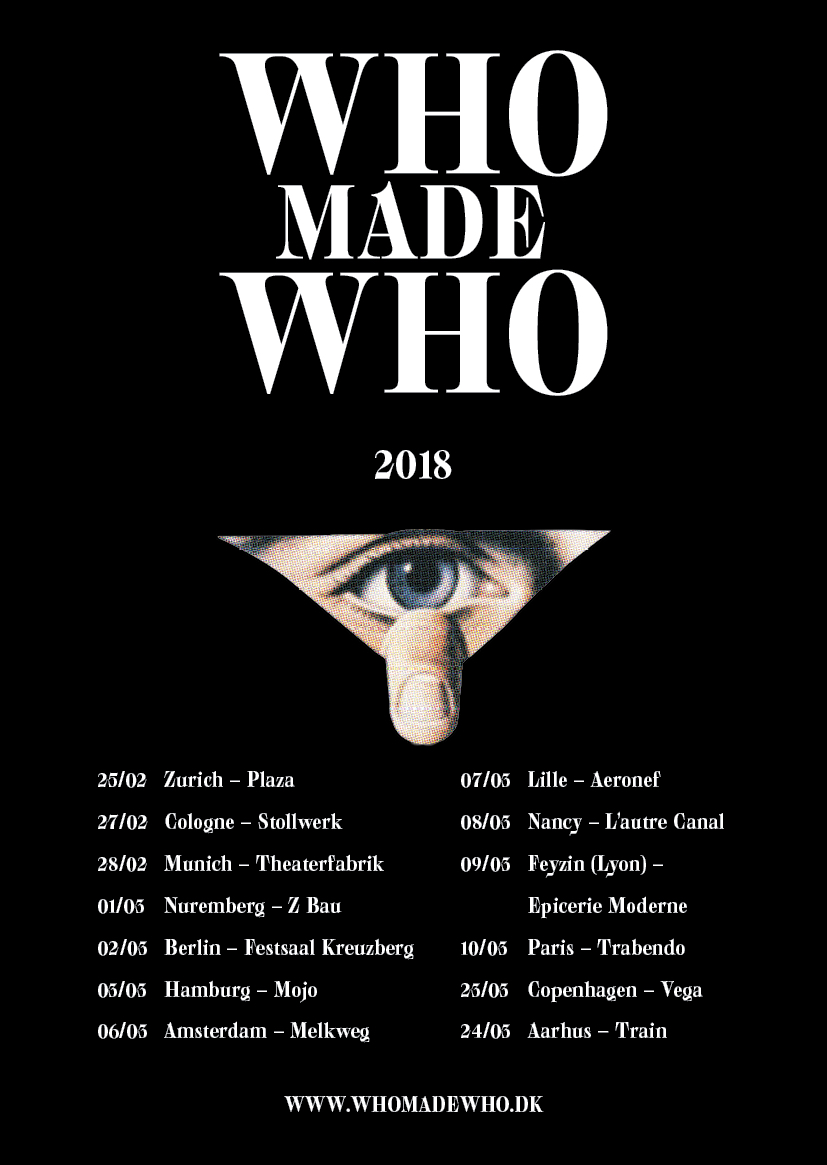 Following the release of “I Don’t Know”, including club-ready remixes from Adana Twins (Exploited), Stereocalypse (Get Physical Music) , Fur Coat (BPitch Control, Crosstown Rebels, Hot Creations) and Margot (Border Community, Kill The DJ), on September 1st, Danish three-piece WhoMadeWho continue to make waves by revealing the breathtaking official music video for their latest single. Directed and produced by Zweihund & Maedchenfilm, “I Don’t Know” was shot in India during August 2017, and is the first of a three part series.

Once again playing on the fringes of pop, Danish experimental trio, WhoMadeWho (Embassy of Music), have made an explosive comeback with “I Don’t Know”. The single was co-produced by ambitious, electronic twosome, Kenton Slash Demon (Kompakt, True Panther Sounds) and is the band’s first new studio music in almost one and a half years, since the release of Hi & Low (2016). “I Don’t Know” is accompanied by a heady selection of remixes from Adana Twins (Exploited), Stereocalypse (Get Physical Music) , Fur Coat (BPitch Control, Crosstown Rebels, Hot Creations) and Margot (Border Community, Kill The DJ), and a breathtaking live performance captured at Northside Festival. 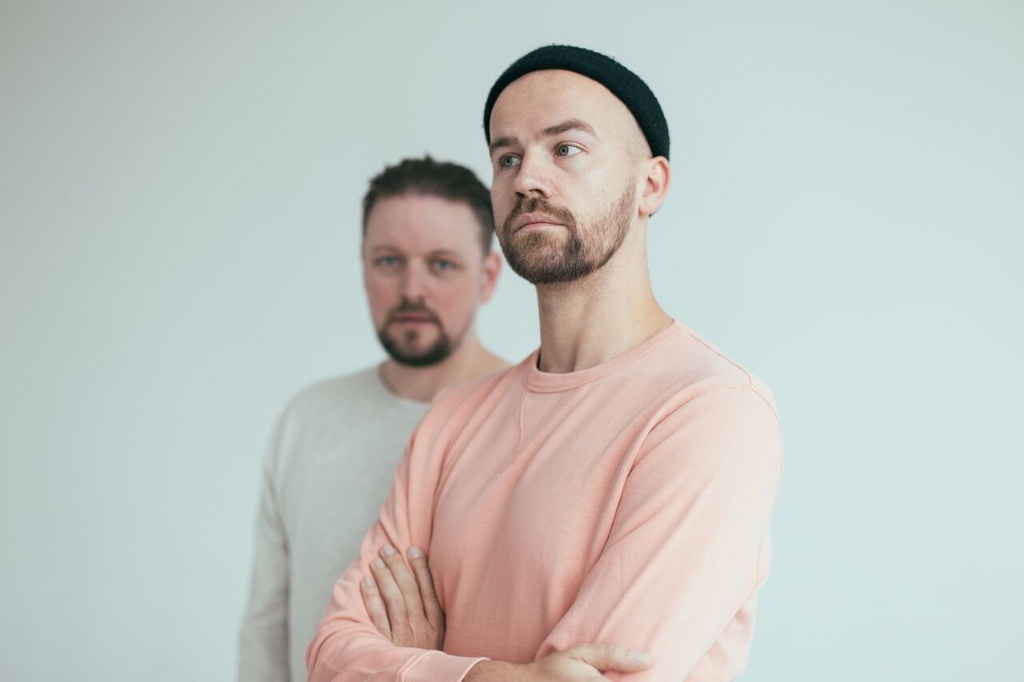 Katja captures the Mojave Desert in epic style, using wide camera shots and visual effects for a vivid and striking music video that adds a whole new dimension to ‘Relentless’.

‘Relentless’ features brooding synths and percussion next to Jeppe’s heart-felt performance – something that Katja embraced to create the music video:

“I decided to shoot in a remote part of the Mojave Desert, on ancient Indian Land with Volcanoes, sheer endless roads and dramatic light because this landscape for me reflects the feeling of longing and loneliness I hear in the song”.

German born but based in Los Angeles, Katia Deferkiel’s vivid cinematography perfectly combines with Adana Twin’s sultry sound and Jeppe’s commanding vocal performance to create a mesmerizing package that is primed for success not just on the dance floor but beyond too.

On teaming up with Jeppe Kjellberg and Katia Deferkiel, Adana Twins comment:

“Working with Jeppe Kjellberg from WhoMadeWho was a pretty cool experience! His voice is simply amazing and we’re more than happy. It was a lucky coincidence that our good friend and director Katja Federkiel from Los Angeles loved the song as much as we do!”

WhoMadeWho compiled & mixed the next volume of Get Physical´s Body Language series.

The genre-crossing band consists of drummer/DJ/producer Tomas Barfod, and the two-headed vocal monster singer/bassist Tomas Hoffding, AKA Bon Homme and singer/guitarist Jeppe Kjellberg. With three extremely different backgrounds in electronica, rock and jazz (respectively), each member supports and compliments each other independently, as one; challenging the traditional ‘band’ structure of days long past.
There is a significant reason why WhoMadeWho, unlike congenial bands like The Rapture, LCD Soundsystem or Radio 4, survived the so-called new millennium. It is their unconditional curiosity towards contemporary club sounds and their approach, often incorporating the functionality of club tracks in their own songs, to look further than the edge of the stage, keeping a close eye on and constantly checking the pulse of the dancefloor. Keeping this virtue close to their hearts has already brought them major exposure in some of the biggest sets from Jamie Jones, Maceo Plex, Tale Of Us and many more…

This approach they have issued in each of their six studio albums. So what better way to revive this approach as the DJ mix? And what Mix-series would be better suited, after acts like Matthew Dear, Dixon, Modeselektor or M.A.N.D.Y., to open WhoMadeWho’s vocabulary book for their own Body Language? Oops, spoiled the surprise. But surely it was clear that one of the best fits for their intentions is also one of the most prestigious and celebrated series – Get Physical Music’s Body Language series. To be out on April 4th.

This is ‘Dream Of Fire’, the maybe most driving and catchiest song on Lydmor & Bon Homme’s upcoming album ‘Seven Dreams Of Fire’.

It’s an anthemic, expansive slice of motorik disco that brings together two complementary voices – the husky drawl of Tomas Høffding, singer-bassist of experimental Danish pop trio WhoMadeWho, and rising singer-songwriter Jenny Rossander aka Lydmor (literally ‘Soundmother’) whose vocals run the gamut from seductive siren to strident rap. Instantly catchy and relentlessly buoyant, it’s a tune that whirls you far away from mundanity, lifting you up on its lush, layered pads and glimmering keys.

The video for ‘Dream Of Fire’ has been directed by Danish cinematographer and photographer Gry Friis and edited by director and editor Christophe Dolcerocca and allows an intimate perspective on the duo.

Danish trio WhoMadeWho have shared the dreamy, guitar-driven “There’s A Way”, the second taste from their forthcoming new EP “Ember” on Get Physical. The EP is out today, May 18th; get it here.