The Juan Maclean – Get Down (With My Love) [HNNY Remix]

“Get Down (With My Love)” is the first single from The Juan Maclean’s upcoming new album, The Brighter The Light. Swedish producer HNNY remixes the track.

The Juan Maclean – The Brighter The Light (DJ Tennis Remix)

Juan Maclean is a Brooklyn-based DJ and producer who has been a mainstay of the New York club scene, as well as maintaining a rigorous international touring schedule, since the release of his first records on DFA in 2002. After putting out an extensive catalogue of 12” singles and LPs for the label with vocalist Nancy Whang (most recently, 2014’s In A Dream LP, and this year’s 12” single ‘Can You Ever Really Know Somebody’), he returns to the label with ‘The Brighter The Light,’ a deep piano-based club track, augmented by three equally DJ-friendly remixes.

“The Brighter The Light” emerged while Juan waits (somewhat) patiently in Brooklyn for Nancy Whang to return from touring with her ‘side gig,’ LCD Soundsystem. Taking the tiniest splice of a demo vocal and sprinkling it throughout, Juan spun off the work being done for the next LP and created a new piece altogether, offering the smallest glimpse of what is to come, but ending up with something with a completely different purpose: his DJ set.

The remixes are a truly euphoric bunch of tracks, coming from Australia’s Len Liese (yes his remix is Balearic AF), DJ Tennis, (fresh from his fantastic DJ Kicks released in July) and Octo Octa, who contributes her second remix for The Juan Maclean (look up her remix of ‘Here I Am’ from 2014, it’s brilliant).

There are already two more singles being planned (with a similar club-driven purpose) to tide over fans and DJ sets while Juan and Nancy finish work on their fourth LP, to be released in 2018. 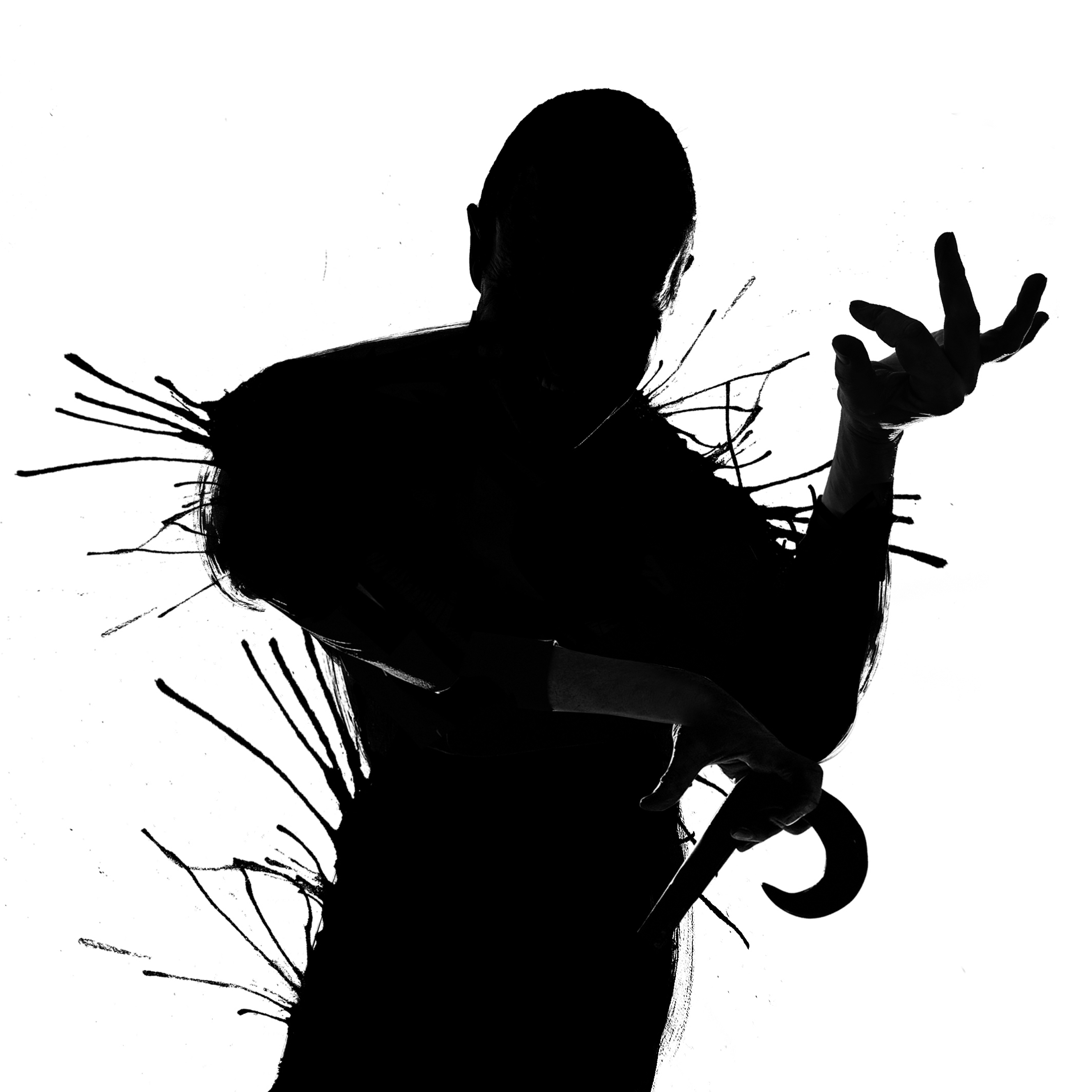 Crooked Man’s debut album was one of the landmark releases for DFA in 2016. Crooked Man is Richard Barratt of Sheffield England, one half of Bleep music pioneers Sweet Exorcist (Warp Records).

This remix collection is Volume 1 in a series of forthcoming collections that revisit key tracks from the LP, reinventing them into headier dance floor explorations, without abandoning the undeniable pop hooks that set this whole release apart from your typical full length dance LP.

Juan Maclean remixing epic album closer “Happiness”. The vocals for “Happiness” were actually sung by Amy Douglas, also the singer in Peach Melba with Juan Maclean. So this remix brings the everything full circle in a tidy way.

Barker & Baumecker remixing “Fools & Fanatics”. This duo are recognized musical leaders in the Berlin techno scene originating out of the world of Ostgut Ton Records and the Berghain club. 2016 saw them releasing their epic 2nd LP entitled Turns.

Crooked Man is currently hard at work on the follow up album, due out in 2017 on DFA Records.

THE JUAN MACLEAN – Can You Ever Really Know Somebody 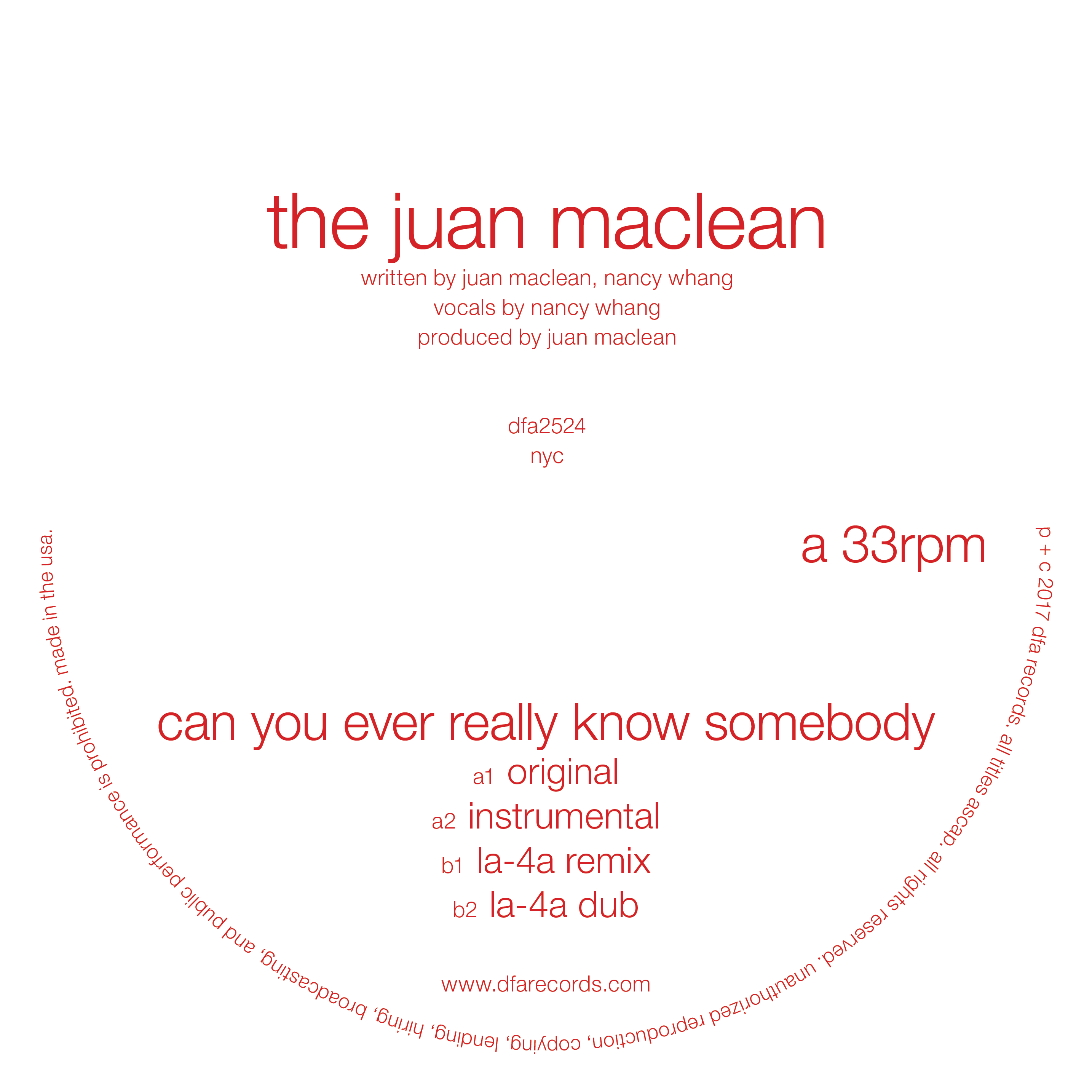 The Juan Maclean return to DFA with a stand-alone single, bursting with deep house elastic bounce and electronic pop flourishes, married to the deadpan earnestness of Nancy Whang’s vocal delivery.

“Can You Ever Really Know Somebody” is the kind of slinky song that is easily absorbed and difficult to forget. It is a taste of things to come, as The Juan Maclean prepares a brand new LP for DFA due out in Fall 2017.

The remix is courtesy of LA-4A, aka Ambivalent and legally known as American born producer Kevin McHugh. Stripping out the house music and replacing it with a grinding electro-acid template, LA-4A creates a lovely buzzing new bed of music for Nancy Whang’s vocals to rest on top of it. This is a remix with wildly successful results and a perfect companion to the original.

February 17th saw the release of the “Picture Perfect” remix as reimagined by the DFA’s very own The Juan MacLean. As Terrace explains “When we tried to figure out who could re-imagine the track we sat down and racked our brains of who exactly could bring this song into a new exciting dimension. The Juan MacLean. That’s who. And that is the only who. The only one that could make this happen. An inspiration and leader in the house crossover sound. Luckily for us, he said yes. And we could never imagine it another way.”

“Picture Perfect” sees Terrace take on a new direction, crossing into new territories. Emerging out of the rubble of Grunge and a decaying house music scene, Terrace is a born adventurer. Escaping day to day life by choosing to create a dance hybrid, drawing on influences that extend back into an 80’s childhood is what he does and where he is now.

Fast forward to now, “Picture Perfect” is the first track from the “Foundation EP”, slated for release in to summer 2017. The single showcases Terrace’s enigmatic signature dance infused indie sound and a series of striking video teasers by acclaimed photographer/director Nitin Vadukul combine with the music to leave you pondering who and what Terrace is and what is to come. Now is the time to find out, Who Is Terrace?

Dirty Sole is excited to release the “Owning It (feat. Nick Maurer)” remix package featuring official remixes from The Juan MacLean of DFA Records. The remix package is accompanied by a music video that effortlessly depicts the single’s themes of fame, wealth, and sex through the streets of Los Angeles.

“Owning It” features vocals from singer-songwriter, Nick Maurer, formerly of the band Greens Keepers. Nick delivers a strong, melodramatic performance that takes the listener on a journey through all of our deepest wants and desires. The project marks a rebranding and fresh indie electronic sound for Dirty Sole, who were previously known for their underground dance releases. This dark, raw, and very analog turn easily lends itself to fans of Talking Heads or LCD Soundsystem.

Dirty Sole is thrilled to have The Juan MacLean provide two official remixes of “Owning It.” His remix is a flawless transition from the original, providing an outstanding deep mix of lush pads and atmospheric layers that surround Nick’s vocals. Rounding out the single, the dub mix strips down even more and delivers a strong percussive thump while adding twisted bits of vocals over the top.

Dirty Sole is an indie electronic group consisting of Daniel Anderegg and Richie Heller. The moniker was created by Richie, who wanted to make electronic music that sounded dirty, but soulful. The group is based out of Chicago, where they originally formed in 2001 and released an album and string of critically acclaimed singles that saw their unique blend of house, funk, and techno. The pair have recently been head down in the studio at work on “Owning It” and their upcoming sophomore album FWD Motion.

The Chicago based indie electronic group, Dirty Sole, is showing their new face. This project marks a re-branding and fresh new sound for the group, previously known for their underground dance releases.

This single is a collaboration with singer/songwriter, Nick Maurer (USA/Germany), formerly of the band Greens Keepers. The title of the track “Owning It” is the theme here, to a darker, raw and very analog sound, similar to that of Talking Heads or LCD Soundsystem. Nick delivers quite a strong melodramatic performance and takes the listener on a journey through all of our deepest wants and desires; which are depicted quite well in the music video (sex, fame, wealth, etc).

On remix duty here is none other than The Juan MacLean (DFA Records). Juan’s remix is an outstanding deep mix of lush pads and atmospheric layers that surround Nick’s vocal and is quite a flawless transition from the original. Rounding out the single, the dub mix strips down even more and delivers a strong percussive thump while adding twisted bits of vocals over the top.

Overall, a very polished project here and a great collaboration from Dirty Sole and The Juan MacLean. A must have for any fans of DFA.

The Juan Maclean – Here I Am (Remixes)

The Juan Maclean release another single from their 3rd album “In A Dream”.

“Here I Am” is an album highlight, a bouncy electro bubble-gum pop song, with vocalist Nancy Whang slowly losing her mind (one last time) dealing with the trials and tribulations of keeping a relationship together.

The single release features remixes from some of DFA’s favorite producers. Octo Octa (100% Silk) takes the original and adds a funky drummer breakbeat underneath, with the song now coming across like Madonna in Manchester.

Tuff City Kids (aka Gerd Janson & Lauer) stretch the song into a more slo-mo acid workout, all electro intensity and robotic vocals. If you ever wanted to hear a singing, jaded robot, this is a good chance to do so.

Lastly, the Wolfram remix takes a less obvious route to the dance floor , nearly losing the main vocals altogether and splicing them back in, as splashes of the chorus get sprinkled on top of a sparse 4/4 arrangement.

“We have these dazzling remixes out right now and we are feeling the spirit of giving, so now you can download all of them from the DFA Soundcloud completely for FREE!”

You can also purchase the new The Juan Maclean, Sinkane, Dan Bodan & Museum Of Love record’s on vinyl, CD and digital from here.

Dance-pop duo The Juan Maclean, aka producer Juan Maclean and former LCD Soundsystem’s Nancy Whang described In A Dream as Whang’s “triumph” and “the Nancy Show,” adding that the album “takes its musical cues from Moroder’s Munich to the Funky Nassau sounds of Compass Point and to anytime in downtown NYC.” (spotify link)