R&S welcome Parisian Sacha Khalife AKA Shcaa with his new double headed single ‘An Ungrateful  Death / Pacific Gold’, following up on his stellar EP on NYC’s Blank Slate back in 2015, two killer releases through Archipel and a more recent LP on Sharingtones.

Abstract, deep and dripping with atmosphere, ‘An Ungrateful Death’ takes the listener on an epic trippy journey –  sensuous rhythms and choppy guitars giddly colide while mumbled vocals offer a dreamy counterpoint before the whole piece transitions into an uneasily blissed out ambient coda. On the flip ‘Pacific Gold’ continues the abstraction, freeform guitar licks skitter and bounce around a loose limbed micro-house groove.

A producer, composer and guitarist based in Paris, Khalife’s restless musicality manages to uniquely meld electronics with blues, house and jazz without seeming forced. “My music found its first legitimacy within the structure of house music, the grooves as rails to let free peculiar shades,” he explains “I try to not  allow my music to fall into mindless experimentations, hopefully the graphic rhythms justify their abstraction.”

With ‘An Ungrateful Death / Pacific Gold’ sure to delight and confound dancefloors across the continent, it’s going to be interesting to see where Shcaa takes his music next.

Taken from ‘The Night Land Remixed’, out May 18 on R&S Records.

Like many of the second wave of Romanian minimal producers, Iulian’s music combines propulsive hypnotic rhythms with rich, organic sounds that envelop the listener in an otherworldly atmosphere. “The creation process is a moment of temporary madness for me” Iulian explains, “I enjoy working with layers of sounds that intertwine and embrace like a lotus flower. Folding and unfolding.” Finding fans in the form of countrymen like Raresh, Petre Inspirescu, Rhadoo, Barac, Cezar, Priku and internationals like Ricardo Villalobos, Sonja Moonear, tINI, Prins Thomas, he’s also dropped critically acclaimed releases and/or remixes for UVAR, The Rabbit Hole, Third Wave Black, Supernature as well as his own Ada Kaleh România imprint.

Opener “Palatul de cleştar” (translated “The glass palace”, received a vinyl only release on his own label in 2014) sets the tone with a mesmeric rhythm track overlaid with a haunting clarinet part and spaced out synth gurgles that combine to enthralling effect. Apollo Records alumnus Laurine Frost supplies a trippy, blown out version that blackens the tone of the original into a work of quiet menace. On the flip “Devotare” (translated “Devotion”, also a vinyl only release on his own label in 2013) strikes a more strident tone, the grooves strut rather than purr – gauzy chord stabs weave between the beats and clunking percussion in a delicate yet complex interplay of elements.

Fellow Romanian Cosmin TRG supplies a remix which displays why he’s worthy of the hype – pushing the BPMs of the original, he creates an urgent, vigorous re-rub that maintains some of Iulian’s delicate instrumentation yet contrasts it with heavy, authoritative percussion. 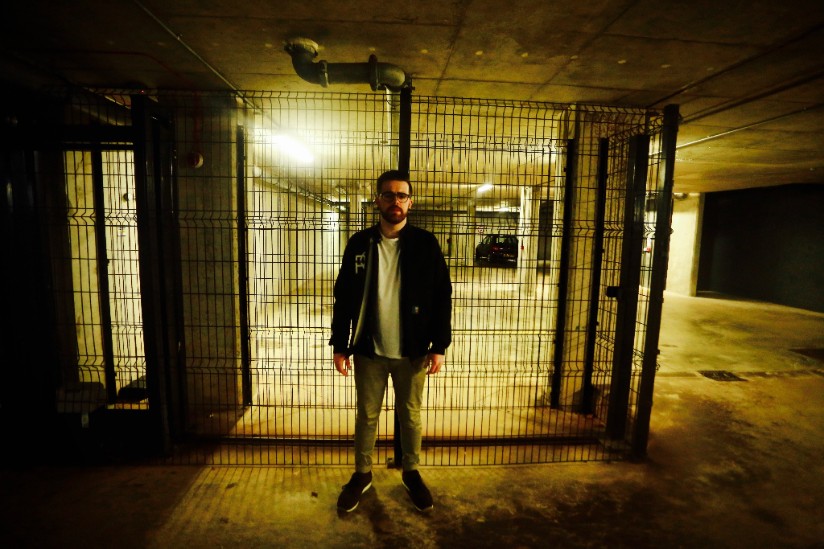 R&S welcomes back Space Dimension Controller’s Jack Hamill for an EP of his trademark future-funk, his first for the label since 2013. The EXOSTACK EP marks a welcome return from Hamill to the kind of astro-boogie that made him a unifying favourite in any discerning DJ’s record box.

“Returning to R&S after a long hiatus is a beautiful thing. Always had respect for the past and the label embellishes some great moments in dance music. Also Renaat is the the most amazingly crazy person I know so it’s always fun.” – SDC

The title track is a masterclass in wide-eyed astral disco – cycling euphoric arpeggios underpinned by dubbed out bass riffs and swooning pads. Unfurling over a sizeable 8 minutes, Hamill justifies every second with a beguiling arrangement that takes the listener on a groove excursion of epic proportions. On the flip, red hot Swede Kornel Kovacs delivers a tuff rerub that jacks up the drums, and cools out the chords, twisting the original into a classic house roller. SDC original ‘BIOPAN’ finds Hamill in more contemplative mood – pulsing drums, a subdued bass figure and woozy synth melodies combine to haunting effect.

Safe Changes is the first track Axel Boman and John Talabot shared from their Talaboman next LP. The Night Land will be out March 3rd on R&S Records. Pre-order here : randsrecords.lnk.to/the-night-land

Apollo / R&S are proud to present a compilation album of a series of classic EPs of timeless vibes and lush percussive excursions from overlooked Japanese innovator Mr. YT AKA Yuji Takenouchi.

The ‘Brand New Day’, ‘Southern Paradise’ and ‘Parfum’ Eps were originally release between 1997 – 1998 on Apollo Records and R&S sub-labels Generations and Global Cuts.

Over the intervening years, the EPs’ heady blend of atmospheric pressure, balmy pads and deep grooves has percolated, gathering fans across the globe, to the point where original copies are in high demand on the secondhand market.

Created in the late 90s on a hardware set up of Roland Super Jupiter, Roland JV1080, Roland D550, Yamaha TX81Z and Akai S1100, Takenouchi was burning with inspiration from the sounds of Ron Trent and Chez Damier, Basic Channel, House of 909, Ian Pooley and Carl Craig.

A video game musician by profession, Takenouchi was used to producing music for specific scenes / sequences – starting from scratch had him baffled. Deciding to set a theme or concept for each EP proved to be the breakthrough he needed, a day of new environment for ‘Brand New Day’, yin and yang for ‘Southern Paradise’ and imaginary fragrances for ‘Parfum’. Looking at pictures related to each of these themes helped to fuel his creativity while producing.

From the sun dappled balearic haze of opener ‘Morning’ to the blissed out bump of ‘Afternoon’, the gauzy euphoria of ‘Ocean In Heaven’ to the cosmic funk pulse of ‘Regard’, the music contained in the ‘Brand New Day’ compilation remains as timely and relevant as the day it was released and should see Mr. YT appreciated alongside the likes of the US and European producers who first inspired him.

John Talabot and Axel Boman AKA Talaboman, are ready to release their album, The Night Land, out March 3rd on R&S. Stream a preview of “Loser’s Hymn” off the LP, below. As they say, the record is “an attempt to reach our subconscious and to document our dreams. We want to ignite hope and push imagination. Close your eyes and open your mind.” Pre-order here.

Slam Dunk Vol. II features three new original tracks and a mesmerizing eight and half minute remix of “Court Vision” by Actress. The collaboration came about following a show hosted by Actress and Sporting Life at Lot Radio in New York and a joint live show in Brooklyn’s Trans Pecos in May, meeting for the first time after an ongoing correspondence exchanging tracks.

Slam Dunk EP Vol II is available now exclusively through BitTorrent and will be released on all platforms on September 30th via Letter Racer and R&S Records.