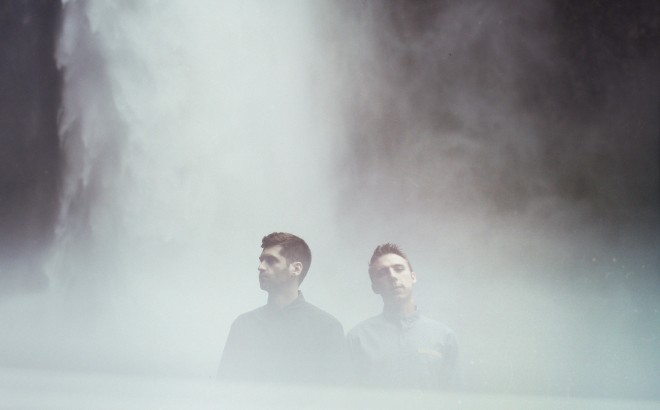 Electronic artist Porter Robinson will release a new version of last year’s Worlds LP on October 2 via Astralwerks, with each track remixed by a different artist. Below you can stream the airy trip-hop like rework from Seattle duo ODESZA (pictured above) of the opening track “Divinity” which features vocals by Amy Millan of Stars and Broken Social Scene.

ODESZA’s second single, “All We Need (feat. Shy Girls)” is an irresistible slice of 21st Century, blue-eyed soul. Produced by a duo whose feel for an infectious melody is matched by their firm footing in the world of bleeding-edge electronics, it’s the perfect follow up to 2014’s hit “Say My Name (feat. Zyra)”.

Now, they’re proud to share the dark, artful video for “All We Need (feat. Shy Girls)” from director Kevan Funk. Harrison Mills of ODESZA commented, “Kevan Funk and crew did a fantastic job producing a beautiful short for our track “All We Need”. We chose Kevan for his use of light, color and cinematic directing style. His use of dark imagery to convey the beauty as well as the tragedy of love and addiction in “All We Need” was a perfect contrast to the bright elements of the track while also playing upon the subtle melancholy undertones of the lyrics.”

Accompanying the video is a series of excellent remixes from Giraffage, Dawn Golden, Robert DeLong, Will Saul, Autograf and more. Autograf’s remix of “All We Need” went to #1 on the Hype Machine popular chart already, making that ODESZA’s 21st #1.

Continuing their ‘Future Summer’ evolution, Autograf is back with their take on “All We Need”, a track off the ever-popular Odesza album In Return, available via Ninja Tune Records and available to download on February 16.

Released as part of an eight track SoundCloud remix EP package, the Chicago natives are adding another ear tingling product to their already impressive portfolio, which includes remixes of Pharrell, Christina Perri, and Lorde.

Giving rise to a variation of their typical formula by stripping the track from its original vocals and percussions, the trio adds rhythmically synced cuts and breaks and blend together Shy Girl’s vocals with the syncopated synths to produce an effervescent texture throughout. To top it off, the track is infused with their signature marimba sound to complete this buoyant and colorful groove.

Having been listed on Dancing Astronaut’s “top 25 artists to watch in 2015”, Autograf has been living up to the hype as they continue to make waves throughout the electronic music sphere with their genre-bending creations. This release comes midway through the group’s biggest tour to date, with multiple dates scheduled in the U.S., Mexico and Canada, including sold out gigs in Chicago and Washington DC. To give their fans a taste of the live ‘Autograf’ experience, which features a live marimba and hand built midi instruments, Louis, Jake and Mikul have released a special recap video shot on location from their sold out gig in The Windy City AKA their hometown Chicago.

With a slew of dates and original content due to be released in Spring 2015, Autograf is on course to have their biggest year to date, so be sure to #LeaveYourAutograf and follow them on their socials!

Seattle based ODESZA have set the dance scene alight over the past 12 months, with their second album “In Return”. The LP received widespread critical acclaim and global support, racking up no fewer than 10 Hype Machine #1’s. Add to this their impressive touring schedule, including an appearance at Coachella, and it’s clear thatthe duo are something of a phenomenon.One such fan of the band, Anjunadeep’s own rising star Lane 8 aka Daniel Goldstein (pic above) reached out and asked to remix his favourite track off the album, “Bloom”. ODESZA and their label Ninja Tune obliged and the result is a rolling house anthem, harnessing the potent atmosphere and pop-infused hooks of the downtempo original, bringing it effortlessly to the dancefloor.

“Lane 8 is an outstanding producer who we’ve been a fan of for quite some time. It was an honor to have him hit us up to remix Bloom. He took the track in a direction we never thought of, creating a driving house vibe that really compliments the song in a new way.”  – ODESZA