Sasha’s collaborations with other artists are always driven by mutual respect and admiration for one another’s craft. His LNOE imprint is recognised as a platform to spotlight exciting fresh talent, and he has been supporting La Fleur since her debut on the label in 2015. After the Swedish producer remixed the acclaimed ‘Trigonometry’ for the label head last year along with playing the renowned Last Night On Earth boat party in Miami, fans have hoped further collaboration might be on the cards.

‘When I first approached Sasha to present some music for his label I couldn’t have dreamt he would suggest a collab together!’ La Fleur says.‘It was a great honour to say yes to the challenge. It has taken some time and a lot of drafts going back and forth to end up with this track together, when it just felt right.’

La Fleur’s career has blossomed exponentially over the last few months – from a game-changing back to back set with Cassy and B.Traits at Radio 1 Weekend, to standout sets at Bestival, Junction 2 and Melt Festival. Still on a high from delivering a flawless Essential Mix, she continues a summer of pivotal achievements including some exceptional releases, which continues with LNOE.

Whilst having two very different musical histories, these two artists are both trailblazers in their own right, constantly pushing forward and bringing the electronic music scene something fresh and exciting.

‘As the track name suggests, our ‘connection’ (in Swedish, ‘Förbindelse,’) made us start and finish this project. We are very happy that we can now share this with you.’ 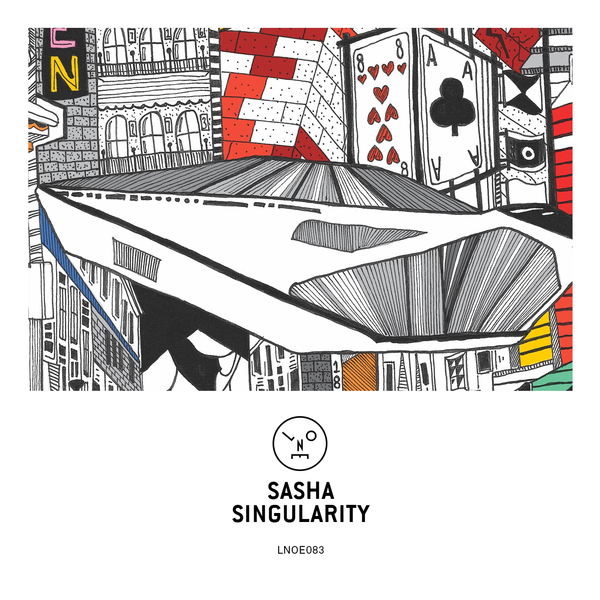 Ejeca aka Garry McCartney is one of Belfast’s best musical exports in recent years from the growing scene in Northern Ireland. His down-to-earth attitude has allowed him to gain recognition from his musical peers and with constant solid releases it’s always been music first, hype later.

His ‘Dizorn’ EP marks another triumphant return to Sasha’s Last Night On Earth imprint. The thoughtful three-tracker, including a remix from Budakid, drops today, Friday 17th March on LNOE.

Picking up from where the intricately and masterfully crafted ‘Vapourspace’ left off, Sasha returns to ‘Last Night On Earth’ with another exquisite production entitled ‘Ether’.

Rightfully championed as one of the worlds most acclaimed DJ’s, Producers, and label bosses, Sasha has consistently delivered some of dance music’s most dynamic and innovative music. ‘Ether’ is another release that perfects sits within the monumental catalogue of productions that Sasha has constructed. Whether it be in the studio or playing at the worlds most prolific venues, ‘Ether’ reiterates the fact that Sasha is showing no sign of taking his foot off the pedal.

Staying true to the unparalleled production technique and style that Sasha has been trademarked with, ‘Ether’ is another drivingly percussive track that will sound out through the speakers of clubs and festivals throughout the globe.

An intensely built track that is driven by a thunderous bass drum rhythm, Sasha once again demonstrates a wonderfully layered production. A carefully distorted synth arrangement whispers throughout, creating an ambient echoing for all those listening.

The second track ‘Intro Mix’ follows the same fashion as the ‘Vapourspace’ release. A fittingly perfect re-work that provides a softer opening to the main production. ‘Intro Mix’ is almost an invitation to fans to step into the rest of the release, which is accompanied by the beautifully designed artwork.

‘Ether’ once again reiterates Sasha’s prominence within electronic music. Always accredited with being a pivotal figure throughout not only the worlds DJ’s booths, but the studios also, this production marks yet another profound chapter for Sasha. Ether is out now on Last Night on Earth. Get it here: pro.beatport.com/release/ether/1520172

Kate Simko and Tevo Howard rejoin forces with a new single, ‘Bring It’, from their upcoming album on Sasha’s label Last Night On Earth.

Native Chicagoans, Tevo and Kate grew up on house music, and their collaboration pays homage to their home city while exploring new ideas outside the limitations of genre boxes. The forthcoming album, ‘PolyRhythmic’, is a masterfully crafted production from two of the current days most dedicated purveyors of Chicago house music.

“Bring It was a track I made for Movement Festival in Detroit a few years back, and it has very Detroit-influenced chords. It became a staple in my live set, and then Tevo added the 303 bass line and classic Roland drums to bring in an old school feeling.” – Kate Simko

Both Kate and Tevo’s heritage shines brightly through ‘Bring it’. Their equally passionate devotions to music started at young ages. Tevo, a bassist who started mixing records in the late eighties, coupled with Kate’s love of piano and house music, makes this a completely natural pairing. ‘Bring it’ foreshadows the essence of ‘PolyRhythmic’, an album that fuses modern inspirations with the classic sounds of house music.

The vocal version of ‘Bring It’ was re-crafted last summer in New York at Butcha Sound Studios with vocalist Amunet Shah. Also enamored by house music, Shah created raw and authentic NYC-style vocals. Kate and Tevo’s new school American sound shines through on this standout production from the album, fusing together elements from Detroit, New York and Chicago house music. The addition of Tevo Howard’s Roland-303 baselines perfectly capture and elevate the classic sound of Chicago. A menacing yet melodic sound that highlights the ‘PolyRhythmic’ project perfectly, A classic sound with a contemporary twist.

‘This will be a larger page to open the door to the statement in sound that PolyRhythmic first set out to make through many ideas shared by us as artists’ – Tevo Howard. ‘Bring it’ paves the way for Kate and Tevo’s long-play album ‘PolyRhythmic’.

This single opens the door and invites listeners into their platform for experimentation in house music. This exceptional production from the album is a chance for Kate and Tevo to stay true to their musical roots whilst exploring broader creative horizons.

Kate Simko & Tevo Howard’s “Bring It” will be released through Last Night On Earth on April 20th.

Sasha presents the intense peak-time two-tracker ‘Vapourspace’ on his own Last Night On Earth imprint. It may have been some time since the award-winning DJ, producer and label head released his last solo material but recently he’s kept our interest firmly piqued with sharp remixes such as London Grammar’s ‘Hey Now’ and collaborations with the likes of James Teej and Joel Mull. – All awash with the invigorating hallmarks of one of electronic music most prolific producers. The continued musical evolution and flawless production of Sasha undoubtedly lies in his ability to balance diverse elements within one single vision. Despite such a liberal resume it’s a fluency in a signature production language over the years that has proved to be an extremely worthwhile investment.

‘Vapourspace’ marks the first in a series of new releases to come from his own revered Last Night On Earth imprint throughout 2015. As is the norm with LNOE, these releases purvey more than just the music; each release will feature the label’s acclaimed artwork, which will add a welcome dimension and deeper sense of intimacy to each EP. With a sublime driving bassline, whispering and ebulliently distorted vocals, Sasha builds layer upon layer delivering vivid and spacious melodic synths that display an intensity and character often absent from todays music. The second track is an ‘Intro Mix’, a rework that the producer himself envisages as ‘perfect for opening with’. Even in a two-track release, the tracks retain a level of patience and care that artists rarely request and audiences rarely consume.;

One of the many unique talents that has seen Sasha ruling dancefloors across the globe, and has gained him the reputation he carries today. ‘Vapourspace’ marks a key point in Sasha’s solo production discography, as he continues to deliver with literate depth, a style that never fails to have his audience hooked both on and off the dance floor.

The latest release on Sasha’s Last Night On Earth label is a great package of deep house electronica from Henry Saiz. The EP features ‘It’s Not Over’ with vocals by Eloy and ‘I Can Feel It Coming’ along with remixes from Joel Mull and Cora Novoa. Out on February 24. Stream in full above.