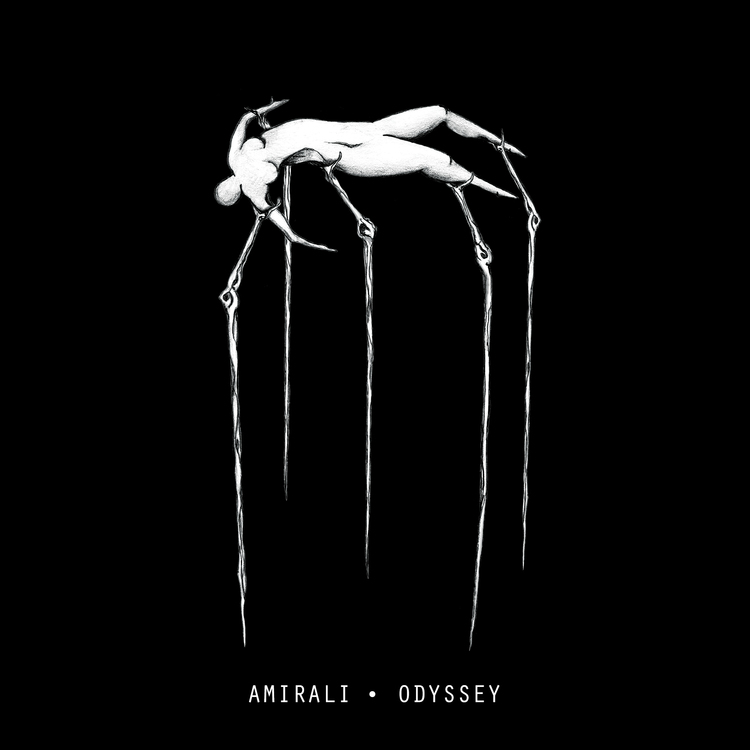 Dark Matters label head Amirali returns with the expertly crafted Odyssey EP, employing his vital understanding of space and texture to construct a highly emotive release featuring a remix from Fort Romeau. The three track package is out digitally on May 14th followed by the vinyl release a few weeks later.

Leading on from his critically acclaimed discography and curatorial work with the inimitable Dark Matters imprint, Amirali enters 2018 with grand plans for the future. He is currently conceptualising a live stage show whilst continuing to provide a platform for all manner of weird and wonderful music.

‘Odyssey’ is a striking example of Amirali’s penchant for songwriting, as well as a testament to his sonic identity, merging memorable harmonies with heartfelt vocals and complex soundscapes. ‘Hidden Past’ veers more towards the dancefloor, brandishing vast sonic explorations and levitating pads amongst detailed drum patterns.

For the ‘Hidden Past’ remix, Fort Romeau mutates the delicacy of the original into a spaced out dose of peak time house, gradually building rich harmonies around a fierce rhythmic motif.

On the creation of this forthcoming EP, Amirali states:

“Nothing is more important than my craft which is the main reason I’m here. There’s no better satisfaction than to create an amazing piece of music, that’s my happiest point in life. I don’t want my work to just be good or ok and that takes a lot of effort and sacrifice in life. I got to a point where I said to myself I have to go and disappear for a while, go be normal and do normal things. Instead of being on the road all the time, stay home, create an environment I like to write music.

There have been many experimentations involved in my upcoming material. I wanted to try and push myself to the limit and I believe I’ve succeeded. For me, it’s all about evolving and exploring areas I haven’t touched. That’s why sometimes it takes a bit longer than expected, I don’t just want to meet people’s expectations, sometimes I want to blow them away. There is so much music coming out week in and week out, the music is evidently becoming more disposable and I would like to stay out of that chaos.

When you stay true to your heart and try to do something different you put yourself in an uncomfortable situation, that’s when you grow as an artist and also as a person, but the satisfaction you get when you finish a work cannot be put into words.”

UK based DJ and producer Fort Romeau presents a deeply ethereal and atmospheric excursion with ‘Reasons’, his first self-released EP that showcases the scope of his hypnotic sound profile.

Following releases on Ghostly International, Cin Cin, Running Back and Live At Robert Johnson, For Romeau delivers his first original EP since last year’s ‘Secrets & Lies’. He’s touched on a variety of motifs throughout his career, from acid to more delicate styles, now he offers the full package with his latest release.

After the release of his third album ‘Good Luck And Do Your Best’ in May, followed by a year of worldwide live shows, a surprise EP release (June’s ‘Kingdom’ EP) and the release of a photography book in collaboration with London-based photographer Laura Lewis, Gold Panda ends 2016 with a new EP and a headline show at London’s Oval Space on December 6th.

The EP, ‘Your Good Times Are Just Beginning’, comes out this Friday November 18th via City Slang and features remixes by Fort Romeau, John Roberts & Daisuke Tanabe – more information below.

To accompany the EP announcement, Gold Panda has shared a new video for title-track ‘Your Good Times Are Just Beginning’. Filmed in Norwich Arts Centre by Robbie Knox, the video was edited by and features imagery from Gold Panda’s touring visual artist Dan Tombs, who has also worked with the likes of East India Youth, Jon Hopkins and Blanck Mass and has spent the majority of this year touring with and developing the Gold Panda live show.

The ‘Your Good Times Are Just Beginning’ EP will be available as a 6 track collection both digitally and on CD and also as a limited edition 3 track 12″ featuring the key remixes. The digital and CD six-track collection is led by the elegiac, hopeful final track from his album ‘Your Good Times Are Just Beginning’, an emotional masterpiece pieced together from heart-tugging piano stabs and soulful trumpets. The song is backed up with a re-imagining of album highlight ‘Chiba Nights’ that is flipped into ‘Chiba Days’, plus three remixes of music taken from his latest LP by a talented and varied cast.

Having previously re-worked the Panda track ‘Community’, Berlin-resident Fort Romeau once again takes the reigns with a gorgeous, nine-minute pulsing, percussion driven recreation of the track ‘Time Eater’ complete with ghostly synth motifs that twirl around Japanese instrumentation culminating in a frenetic release. US producer John Roberts, who himself released one of the best deep house records of the year, remixes ‘Chiba Nights’, transforming it into a thumping, acid-tinged affair that mixes space and warped electronics beautifully.

Finally, the contemplative ‘Song For A Dead Friend’ is taken on by Japanese musician Daisuke Tanabe, whose wide ranging musical influences of electronica, folk and jazz all come to bear on this track. Radically different to the two that run prior to it on the 12”, it’s more akin to the likes of Boards of Canada and Plaid, as it slowly ebbs to a wistful conclusion over three different musical phases. The final track on the ‘Your Good Times Are Just Beginning ’EP is a cover of ‘Time Eater’ by the Korean-based duo Sssigghborggg that also features the talents of Luna who performing the traditional Korean stringed instrument, gayageum on the track. The gorgeous, slightly eerie take on the original is rooted in post rock but has a unique beauty all to itself, as it unfurls to a dense, math-rock psychedelic jam.

As well as this, Gold Panda has also recently released a photography book with London-based photographer Laura Lewis entitled ‘Good Look And Do Your Best’, which is the counterpart to his highly acclaimed recent album of the same name. The pair set out to capture the rich sounds, moods and colours of suburban Japan that they had fallen so in love with during a trip in 2014, which became a catalyst for the record. It is available at selected shops and online via Bandcamp.

Its been 12 months since Cin Cin’s inaugural release and to celebrate co founder Fort Romeau (Ghostly Int. / Running Back / Live At Robert Johnson) gives us 2 cuts of arpeggiohouse while Honey Soundsystem’s Bezier delivers that top tier Hi NRG sound that has become his signature. Not a bad way to mark the label’s first birthday.

Response to ‘Through The Yard’, the first single from Kauf’s debut album ‘ReGrowth’ has been excellent, with features on BBC 6 Music, KCRW, Insomniac, Acid Stag, LA Buzzbands and many more. Friday, 29th April, see’s the release of the Fort Romeau remix of ‘Through The Yard’ via Permanent Vacation, available on 12” vinyl and all good online retailers:

Fort Romeau has been making waves for a while with his “discotheque music from London” with releases on Ghostly / Spectral, Live At Robert Johnson & 100% Silk … he gives the track a dancefloor rework that stays true to the original but leads it further into the realm of the late night / early morning revelry…

With his original productions Kauf has achieved that nearly impossible feat of making dance music that is also song led and lyrically deep. There just aren’t that many records that work in the club and also explore the emotional conflicts and internal struggles that life poses.

His debut album ‘ReGrowth’ is out in August, but before that he’ll be releasing a few more tracks alongside equally staggering remixes from some of the electronic worlds greatest underground talents. Look out for ‘A Ruin’ coming soon with remixes from Man Power and Blue Hawaii….

Taken from Fort Romeau’s EP ‘Secrets & Lies’, which is set to be released on January 15th via Frankfurt label Live At Robert Johnson. Vinyl available (http://bit.ly/1mNYtgA). Video edit by Stefan Haag. Preview the whole thing below.

When introducing the world to his sophomore album, Insides, Fort Romeau explained how preparing and performing in certain European clubs informed his creative process. The attention to detail and patient composition mirrored his sets at places like Robert Johnson in Frankfurt, where he could develop a rich musical narrative over the course of multiple hours. And now, Frankfurt Versions springboards from Insides’ slow-burning dancefloor into the next room over, where hearty club grooves dominate the soundsystem.

We’ve already heard Andreya Triana‘s “Gold“, the lead single from the Soulful Londoner’s highly anticipated album, ‘Giants’, out on Counter Records on March 23rd 2015. The single is out on March 16th and is supported by the Momentum Music Fund. A testa-ment to her love of music and an expression of her joy of singing and songwriting, “Gold” is a confident and self assured track. A joyous stomp of a single, combining an incessant beat with Andreya’s raw, layered vocals, “Gold” is sure to captivate and inspire the listener.

You can now stream four great remixes of the track, by the likes of Hackman, Fakear, Nikich and Fort Romeau (here). Andreya plays Village Underground on April 2nd and releases her new album ‘Giants’ on May 4th.