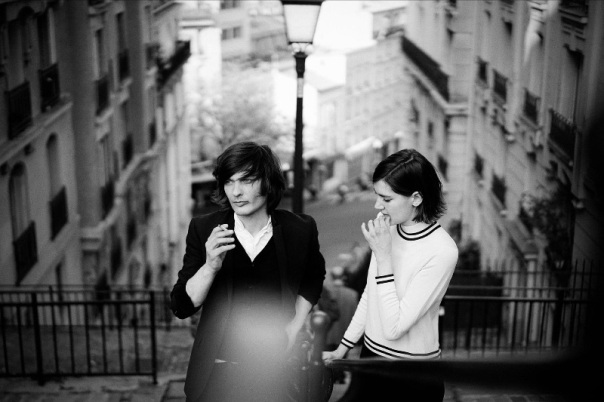 French duo Double Mixte bring their digital thunderstorm of neon lit noire to the Italians Do It Better family on their debut EP, out now. Mixed & produced by label head Johnny Jewel, ‘Romance Noire’ opens the door to a new wave of Italians Do It Better artists coming in 2019. Fresh Blood. New Tears.

Double Mixte formed when Clara Apolit & Thomas Maan met in Paris, and there was an immediate pull to create music together. They pooled their combined interest in powerful narrative and dark 70’s French film music to write lyrically vivid songs. In 2017, Thomas reached out to Johnny Jewel for what soon became a collaboration that expanded their vision into a haunting debut EP.

The title track arpeggiates & boils as waves of bass flow beneath. Rhythms are carried to the ceiling by a searing cascade of disintegrating color. A heavy backbeat anchors Thomas Maan and Clara Apolit’s poetry, ready to wear for a night in the face of oblivion. The cinematic “Arlette” is a call for discovery through a darkness lit only by the glare of headlights in digital rain. Through all of this, Thomas Maan’s incantations search for the lonely, lost in the void of electronic fog. “November” finds in Clara an Anglophonic chanteuse, meditating on the cycles of time. A blend of suspended sound & an uncertain melody contracts & expands before dissolving. ‘Romance Noire’ is art that both contemplates and transcends time’s firm grip. It’s a filmic journey inducing a vague sense of future nostalgia.

Listen to EP on full in Spotify here