Blaufield Music founders Booka Shade have long been respected figures in the contemporary electronic music scene having racked up a handful of crossover cuts amongst their regular output aimed towards more underground realms. Here we see them focusing on the latter with a new EP for the esteemed Bedrock label, headed up by John Digweed and home to material from the likes of Guy Gerber, Guy J, Eagles & Butterflies and of course the label founder himself.

Booka Shade : ‘’We have been extremely fortunate in our careers having our music released on many revered and renowned labels. We are particularly humbled and proud to have DJ legend John Digweed pick three of our tracks for a release on Bedrock.’’

Title-track ‘Rosebud’ leads with an amalgamation of dark and brooding bass tones, percussive chimes and a bubbling arpeggio lead at its core whilst ethereal voices and resonant leads ebb and flow within. ‘Lust 2.1’ follows with the focus on tension building atmospherics, metallic percussive rolls echoing vocal chops before marimba like synth tones and chugging arpeggios take the spotlight to tail out the composition.

‘In Velvet’ then rounds out the package with elongated subs, sweeping atmospherics and a choppy synth sequence all dynamically evolving and unfolding around an organic drum groove driving the composition.

Hot off the back of the ‘Cut The Strings’ LP from Booka Shade which dropped on their Blaufield imprint in April, the duo have reached out to some of their contemporaries and fellow artists they admire to revisit and provide their own interpretations of what has been yet another impressive chapter in the Berlin based artists careers.

The Booka Shade ‘Cut The Strings Album Remixes 1’ package is out on Blaufield 25th May 2018.

This November 22nd, 2016, to celebrate the release of their much-anticipated Movements 10 LP (out via Blaufiled M10 on October 14th), Booka Shade will bring their captivating show with unique innovative visuals, pioneering lighting design and full live instrumentation to the Southbank Centre’s* Royal Festival Hall. Debuted at Sonar Festival in Barcelona this June, the brand-new, never-before-seen live production of MOVEMENTS 10 has made its way around some of Europe’s biggest festivals and venues including Beat Herder Festival, Zurich Open Air and SW4. With stops to come at Heimathafen, Berlin and Metropolis Festival, Dublin, the Royal Festival Hall appearance and UK headline show debut promises to be their best yet, as the excitement and momentum around this re-issue crescendos in a breathtaking and emotive performance.

“We´re absolutely thrilled to have the opportunity to present the MOVEMENTS 10 show at the Royal Festival Hall London. Playing at this highly prestigious venue will certainly be a highlight of the year! We’re only doing a very limited number of MOVEMENTS 10 concept shows worldwide which include completely new visuals and immersive lighting, and Royal Festival Hall is the one and only M10 headline show we will do in the UK after the festival season. It’s going to be a very special night.”

Similarly to Hunter/Game, offering a reprise of “In White Rooms” you’ll find Jonas Rathsman, who’s honest and powerful interpretation of the original track is, at the very least, moving. Multiple layers of synths build up texture throughout, letting the original melody peak through the surface only momentarily.

Movements 10 which features a 2016 re-master of the original album and 10 exclusive remixes from Nils Frahm, Jonas Rathsman, Deetron, Eats Everything, Dennis Ferrer, Patrick Topping, M.A.N.D.Y, Andhim, Hunter/Game and Chi Thanh on a 2CD LP is out 14, October 2016 via Blaufield M10 – https://bookashade.lnk.to/BSM10

Limited edition deluxe 3LP boxsets will be made available which include 3 x 12” vinyl, a bonus fold-out poster, vinyl-only remixes and an exclusive download card including unreleased content.

Digitalism released their brand new single ‘Wolves’ featuring Youngblood Hawke yesterday through their own Magnetism Records. Having hinted at a change in direction with a soundcloud-only release at the start of the year, Hamburg duo’s ‘Wolves’ is the first proper single that further underlines this new direction. The track features Youngblood Hawke and aims to marry their own trademark European electronic sound with the US bands catchy, indie-pop vibes.

The track has be given the deluxe remix treatment it deserves with Ed Banger favorite Riton, fellow German duo Booka Shade and the legendary RAC serving up their own reworks of the original.

Watch the official video and stream all remixes below.

Walter Merziger and Arno Kammermeier, a.k.a. Booka Shade, are back with their new single ‘Crossing Borders’, which features Fritz Kalkbrenner on vocals and sees the German house duo back in the studio after their 2013 album EVE. In true Booka Shade style, ‘Crossing Borders’ is the kind of deep, smooth house track that brings a dance floor together in the small hours, and Fritz Kalkbrenner’s vocals feel a perfect fit. No word yet on a new album from the duo so far, but this new single is surely a sign of more to come, and the video is a trippy delight.

‘Crossing Borders EP‘ is released on Embassy One/Blaufield Music and can be stream in the player above. Grab it and the remixes from Beatport here: http://bit.ly/cb-beatport 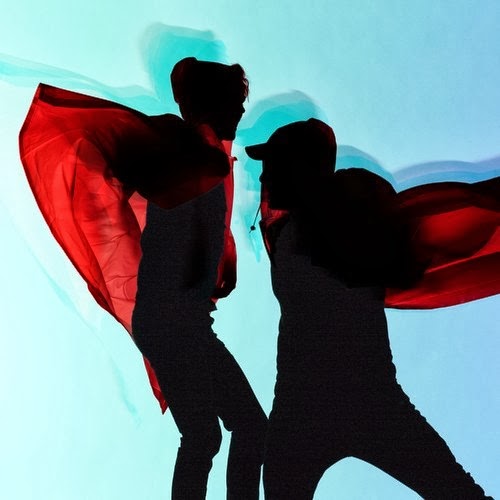 Berlin-based dance duo of Arno Kammermeier and Walter Merziger, better known as Booka Shade, will release their forthcoming album, Eve, on November 1 via Embassy One. Below, you can watch the official video for the first single, Love Inc, directed by Thomas Hayo. Pre-order the album here.