Just in time for Summer’s warm up arrives Romare’s ‘Come Close To Me (Live Session 1)’ a hazy, pulled-apart live edit of the single taken from his 2016 LP Love Songs: Part Two. Along with the track, which rides out like a slow-burning exercise in self-sampling, is a witty, 80’s inspired music video drenched in analog VHS sheen and complete with a blurry Mazda speeding off into a fading dusk. “From our first phone call discussing the concept for ‘Come Closer’ [Come Close To Me’ – Ed]”, says director Greg Barnes “Archie (Romare) and I were on the same page. We both wanted to push the limits of what a performance-based, session style video could be, and it was clear that meant smoke, lasers, and his Mazda.”

The single and video are released today (premiered via Crack) on Ninja Tune, just as Romare prepares for his forthcoming headline show at KOKO on 11th November – his biggest and dare we say most impressive performance to date– which will see him showcase his disco-heavy cuts with a live band in addition to DJ sets by Romare himself and a string of other companions late into the night. 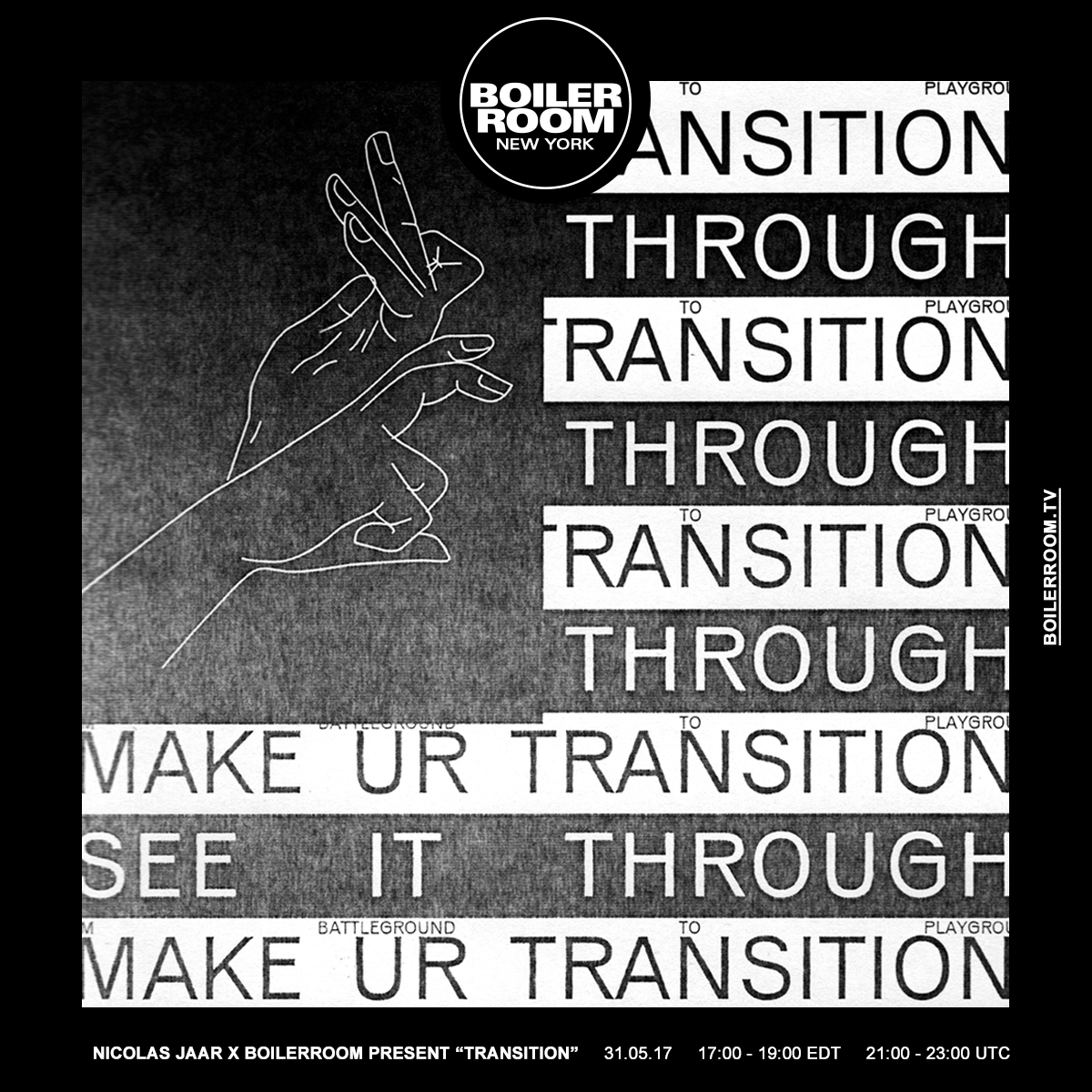 Shot in Brooklyn at the now-defunct DIY venue Aviv in September 2016, the film takes a cue from Jaar’s semi fictitious network of interlocking radio stations as well as his latest studio album ‘Sirens’.

From its very first enigmatic scene to the unmissable ending, ‘TRANSITION’ is an unscripted POV journey into one night in NY at a transitional time in America.

Stream Carl Craig “Versus” on NPR and read the story of the record.

Versus is a work in progress, a perfect encapsulation of InFiné’s philosophy, which serves a double duty as a platform to foster hybridization between genres, and also as the label’s ten-year anniversary gift to itself. From an initial recording in 2010, the project evolved into a full studio album containing two original compositions by Francesco Tristano and symphonic versions of Craig classics, reworked in the studio by the man himself. The much awaited new album from the Detroit techno producer will finally be available worldwide on May 5th.

Live: The XX feat. Florence Welch – You’ve Got The Love

Last night The xx performed the final show of their Night & Day residency at London’s iconic Brixton Academy, and Florence Welch joined them onstage for a special performance of Jamie XX’s 2009 remix of ‘You’ve Got the Love’

You can check out some great fan footage here:

Following the success of their recently released third studio LP, Three (out now on Republic) and sold-out live dates across North America, Europe and Austraia, Phantogram are excited to announce a new leg of North American and European tour dates for Spring 2017. The tour kicks off in Honolulu on February 25th and includes stops at some of the year’s biggest music festivals, including Coachella, Sasquatch!, Middlelands and Governors Ball, while winding across select cities in Europe through June 4th (full tour dates below).  More dates to be announced soon!

The news comes just after the band kicked off 2017 with a fresh A-Trak remix of their hit song “You Don’t Get Me High Anymore” featuring Joey Purp, a cover of Radiohead’s “Weird Fishes / Arpeggi” for Triple J radio in Australia and a live-streamed Billboard  performance.

Phantogram are diving into 2017 with two new releases for fans- the first is a fresh take on their hit song “You Don’t Get Me High Anymore” from remix legend A-Trak, with an additional verse from SaveMoney Crew’s Joey Purp. The remix will be available for purchase and on all streaming services tomorrow but you can preview now via XXL.

While recently in Australia on tour, Phantogram recorded a cover of Radiohead’s “Weird Fishes”, in addition to their own song “Cruel World”, for Triple J radio, which aired today.

Check out links to both below and catch Phantogram out on the road in support of their third studio album, Three, out now on Republic.

London Grammar – Rooting For You

On New Years Day, British trio London Grammar released their spine-tingling new track and performance video for “Rooting For You.” “New Year, new music” the band simply stated on their Facebook, Instagramand Twitter from Australia where they had headlined on New Years Eve at the annual Falls Festival in Byron Bay.

“Rooting For You,” is the first piece of new music to come from the band since 2014 and is available worldwide now on all digital platforms. Their breathtaking new performance video — directed by BISON — is available via the bands website http://www.londongrammar.com and can also be viewed here:

London Grammar emerged in 2013 with the release of their critically acclaimed debut album, If You Wait, and quickly went on to becoming one of the most exciting international breakthrough acts of recent times. Winning a prestigious Ivor Novello Award for their hit single ‘Strong’ and being nominated for a BRIT Award, the trio have since sold-out multiple headlining tours worldwide and have performed on high profile US TV shows such as ABC’s Jimmy Kimmel Live!, as well as the former NBC’s Late Night With Jimmy Fallon and CBS’s The Late Show with David Letterman back in 2014.

“Rooting For You” is available on iTunes, Apple Music and Spotify.

“Live” is Moderat’s first-ever live album. It was recorded mainly at Berlin’s Velodrom on June 5, 2016 during a hometown show that sold out in a matter of minutes. And now it’s here. From Berlin to your hands, with love.

Ahead of another massive tour starting next week, Aesop Rock has just shared another entry in his series of music videos for his career landmark album The Impossible Kid. “Lotta Years” goes the literal route, with the MC wandering around the city ruminating on the young people he encounters and his place in their culture.

The Hey Kirby tour kicks off November 25 in Eugene, OR. Aesop will be joined by Rob Sonic and DJ Zone with support on all dates from Homeboy Sandman

Today, Tycho shares two new remixes of their first single ‘Division’ from the recent album Epoch, which is set for physical release on Jan 20th via Ghostly International.

Kaitlyn Aurelia Smith — fresh from her Pitchfork Best New Music-rated collaboration album with Suzanne Ciani, Sunergy — delivers a melting ambient epic while Heathered Pearls, a Ghostly staple, bolsters the dance elements of the original. In addition to the two remixes Tycho is also sharing a video for ‘Division’ that was filmed lived at their Red Rocks Amphitheatre performance on September 17 featuring official audio from the album.

Epoch is the final album in the trilogy beginning with 2011’s Dive, then 2014’s Awake and culminating with this year’s Epoch (Ghostly International). This period between Dive and Epoch marks a significant maturation for Scott Hansen’s continually expanding project, one that has taken him from a solo performer to fronting a live 4-piece band on large stages across the world. Epoch hones the sonic aesthetic of Dive while drawing on the kinetic energy of Awake, it explores darker themes and new musical territory. Epoch is available digitally now and for physical pre-order now due out January 20.

This January, Tycho will embark on a world tour. The tour will begin on Jan 7 in Oakland, CA at the Fox Theater. From there Tycho will travel across four continents including Asia, Australia, Europe and North America. For a full list of tour dates, tickets, and more information, please visit http://tychomusic.com/.