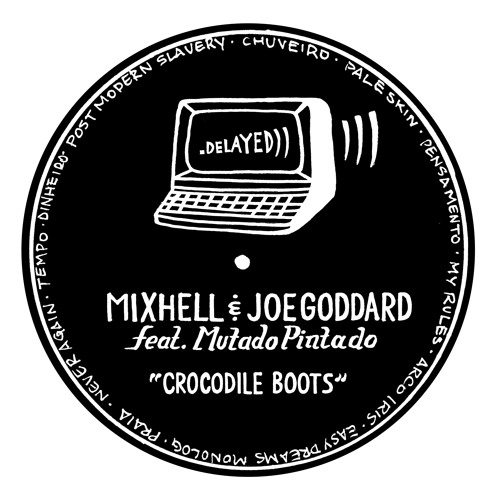 Last October from Mixhell, Joe Goddard (Hot Chip) and Mutado Pintado (Paranoid London), Brazil, London and the USA came a great mix of unexpected sounds. Dropping via Delayed Records, the Crocodile Boots EP offered a cacophony of musical elements and spoken word that’s myriad intricacies made it one of the most sonically intriguing releases of the year.

The title track ‘Crocodile Boots’, a funny, funky poem about daily life, politics and miscommunications, has received a special remix and accompanying visual from close friends and confidants, Soulwax.

Speaking on the video, Iggor Cavalera says “this video is an amazing compilation of mad ideas from Mutado’s brain mixed with the low-fi images of Laima and himself on a duet between the confused red neck and a Portuguese/Brazilian spoken girl.”

The Brazilian production duo Mixhell first met Joe Goddard in Brazil around 2006. DJ’ing many times together and supporting Hot Chip, the Crocodile Boots project was born out of a few 30-minute jam sessions they did in 2015 alongside close friend and Paranoid London affiliated Mutado Pintado.

Since writing ‘Crocodile Boots’ the four artists haven’t again been in the same place at the same time – testament to the pure and organic nature of this release. It’s seen massive club support from an array of tastemakers including Erol Alkan, Damian Lazarus,Jamie Jones, MJ Cole and Thomas von Party (Turbo Recordings) and what started out as a fun breather from their other projects has become something much more significant and potentially disruptive to the current electronic music landscape.

2017 will see Mixhell unite once again with Soulwax, kicking off a Spring Tour with them from March that will include live band performances on drums (Iggor) and synths and backing vocals (Laima) as well as DJ after parties as Mixhell.

Crocodile Boots EP and Soulwax remix is out now. Full remix package to be released on 27th January, 2017.