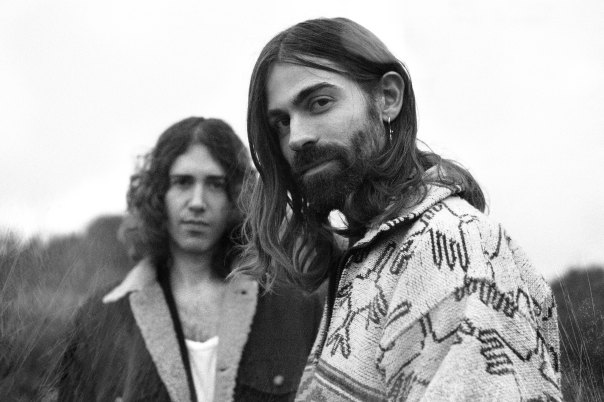 “We came to Ewan with what is basically an old, bluesy-type tune” says Leo Duncan about ‘Twist Your Arm’, “slide guitars, chain-gang backing vocals, gospel piano – and Ewan took it in a Weatherall / Primal Scream / Screamadelica direction, which was fine by us cos that was why we wanted to work with him! And he preserved enough of the original vibe for it to still feel kind of rootsy.”

The track is the perfect example of the analogue-meets-digital vibe that Ben Moorhouse and Leo Duncan, aka Ten Fé had going on during their album sessions with Ewan Pearson (Jagwar Ma, M83, The Rapture) in Berlin last year. With two lead singers and songwriters, each with their own distinct voice and songwriting style – and Ewan’s trademark pulsating electronic grooves underscoring this and the rest of the forthcoming LP – it’s characteristic of the band’s songs that they bend fluidly between one style and another.

It is perhaps of little surprise that Ten Fe’s debut album ‘Hit The Light’, due out 3 February 2017, is marked by its diversity. Each track on ‘Hit The Light’ stands independently, whilst the overall experience is balanced by the accomplished interplay between style and song. Their mix of Americana with darker, driving electronics, and vocal harmonies make the London band genuinely stand out.

The 11 track LP follows the release of their acclaimed singles, ‘Make Me Better’, ‘In The Air’, ‘Elodie’ and ‘Turn’, last year, all hitting no. 2 Hype Machine and amassing over 6 million Spotify streams as well as a cover of Underworld’s ‘Born Slippy .NUXX’ in December which was also a Hype Machine no. 2 most popular.

Recorded in the studio built into the Berlin HQ of Kompakt Records in Berlin with Ewan Pearson, ‘Hit The Light’ is a highly accomplished album with a captivating concoction of styles. The record seamlessly fuses intricate contemporary electronics and the band’s signature energetic mix of Americana, Manchester baggy and soulful vocals.

Named ‘Hit The Light’ after the big theme of the album: coming from dark into light; an act of renewal.  The album is the result of 4 long years’ of work, which has led them from busking on the London Underground, through a bedroom in Birmingham, to eventually recording in Berlin. The depth of their relationship, creative and personal, has seen them through. It’s no coincidence the name of this band means “Have faith”.

‘Hit The Light’ will be available through SOME KINDA LOVE / [PIAS] on CD (SKL004CD), Digital (SKL004DA1) and the LP version is a double vinyl LP (SKL004LP). Pre-order the album through Ten Fé’s store HERE. Pre-order on iTunes HERE and get ‘Elodie’ and ‘Overflow’ as instant downloads.

Posted on January 9, 2017, in stream and tagged TEN FÉ. Bookmark the permalink. Leave a comment.