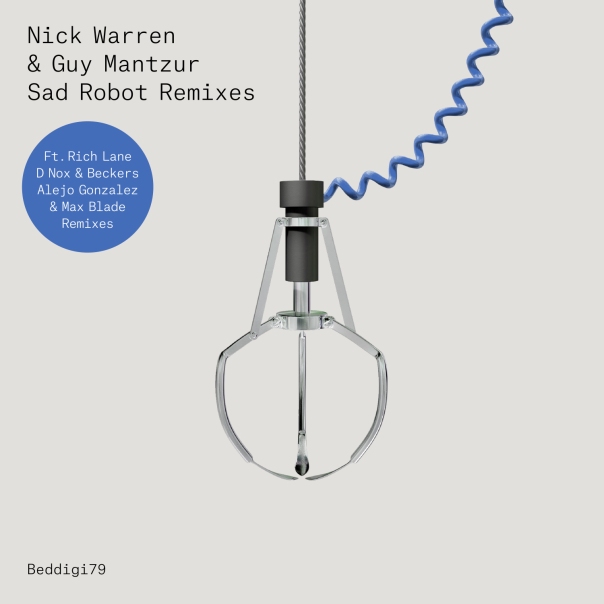 The original “Sad Robot” collaboration between Nick Warren and Guy Mantzur was heaped with acclaim when it first appeared on John Digweed’s Bedrock label a year ago. This sparkling gem of a track pushed all the right buttons with a euphoric attitude that only comes from years of experience of rocking the best dancefloors around the world week in week out, and now the label is set to take the story to the next level with 3 diverse, exciting new remixes.

The enigmatic Rich Lane from Newcastle Under Lyme (who also records under aliases such as Original Disco Thing and Chug Norris) has been gaining plaudits for his musical creations that loosely fall into the realms of what are variously tagged “Slo-Mo”, “Chug”, “Nu-Disco” and even “NEW New Beat”. By channelling the sounds and feel of classic House, Techno, New Beat etc. and mellowing the groove towards a slower mid-tempo ride, whilst adding a sprinkling Post Punk, Funk and Synth Pop, Rich Lane is a masterful producer who draws together so many disparate elements that seem to unite a particular type of music lover. Here, through his love of classic analogue sounds, he has created a truly original take on “Sad Robot”.

German duo, Christian “D-Nox” Wedekind and Frank Beckers, have become firm favourites worldwide over the past 10 years with a perfect fusion of studio expertise and an impeccable dancefloor touch Their creative chemistry has become an unfailing source of massive grooves and their exceptional remix of “Sad Robot” sees them firmly at the forefront of the current phase of musical evolution, drawing from the best elements of a variety of musical genres, to create a mesmerizing new future.

Hailing from the current hotbed of exciting musical evolution, Argentina’s Alejo Gonzalez (renowned for his show on Radio 90.3FM Delta) has joined forces with fellow DJ and producer Max Blade to create a beautifully melancholic interpretation of “Sad Robot”, a perfect, understated finale for this remix package. The undoubted talent of this young duo marks them out as being ones to watch for the future, for sure.